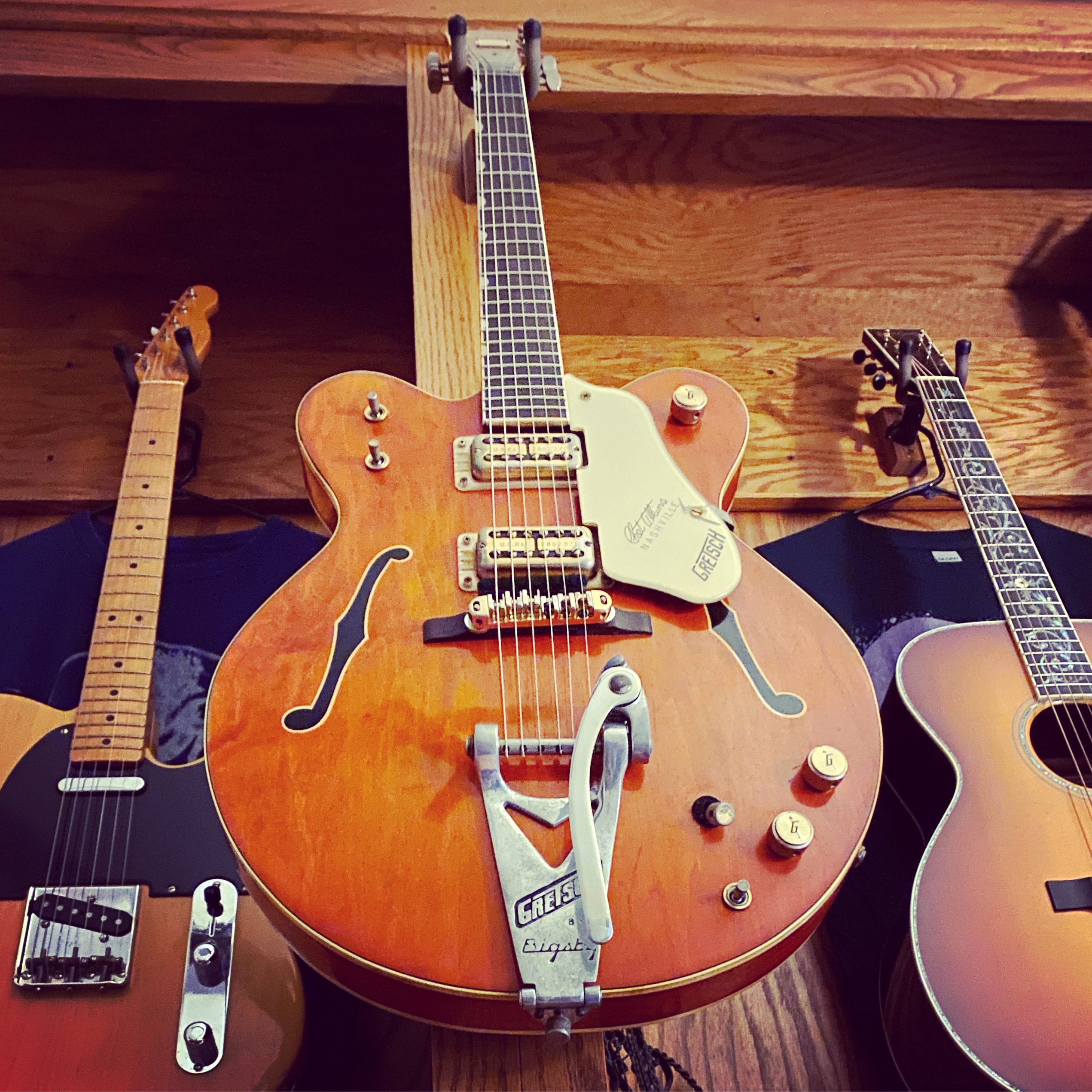 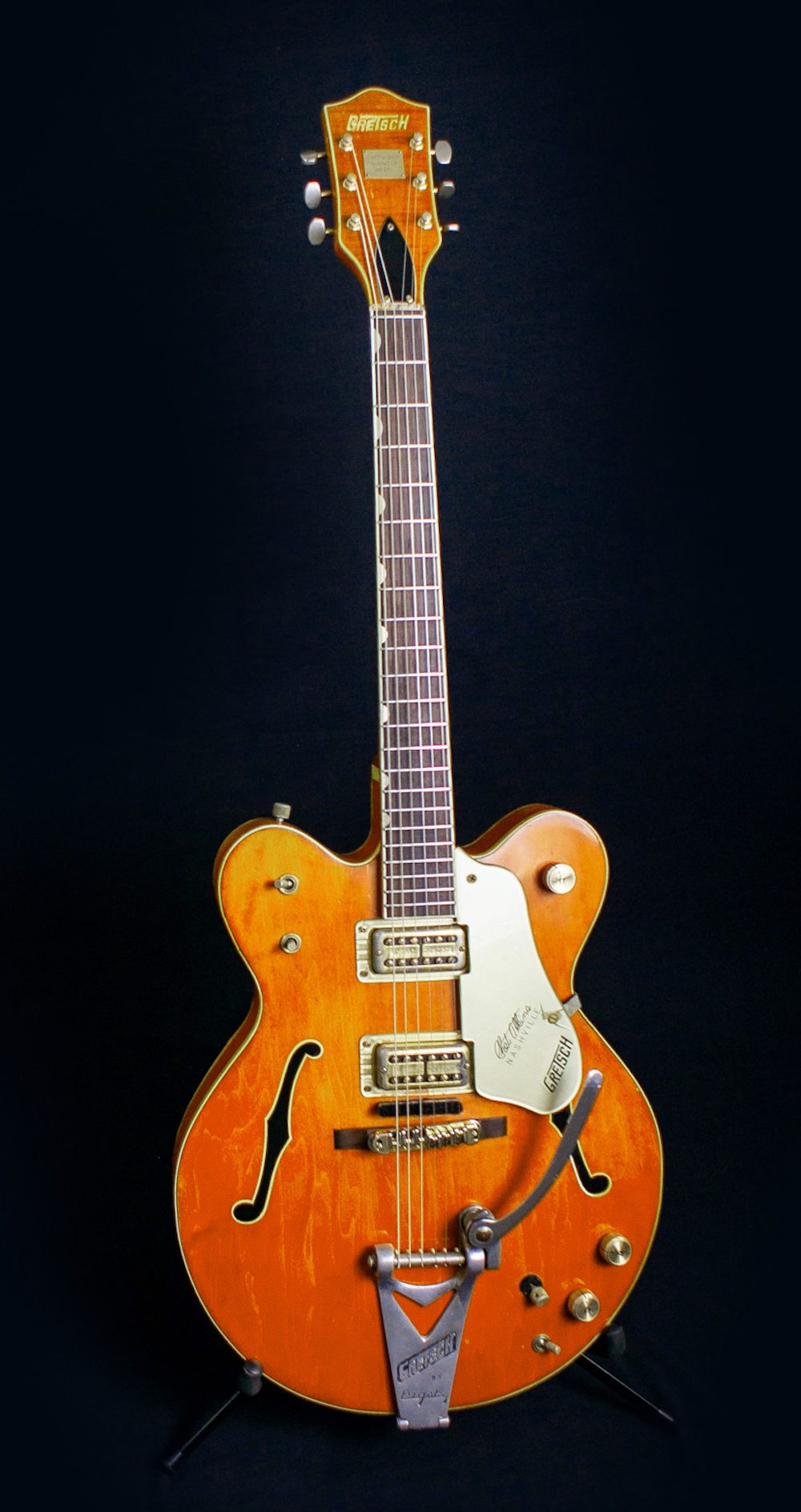 The guitar was beautiful but shows its age. It has play wear and light scuffing. The pickups are oxidized from age. The binding has cracks but is in overall great shape for an old Gretsch, none is missing and smooth all around the guitar. These are all due to age and come across beautifully in this vintage guitar. There is also a crack in the pick guard. The leather snap on back pad is in surprisingly great shape. This guitar plays wonderfully well. It has a fantastic refret, and playing it is like playing a new guitar. All the electronics work seamlessly, and the pickups sound amazing! Action can be as low as you want it without any deadness or buzz or rattle. Neck is straight as an arrow and feels and plays great. Everything works as it should. All around great playing guitar.

Gretsch for More than a Century

Born in America, Gretsch is a strummin’ and drummin’ company that was founded in Brooklyn, New York over 135 years ago. By the 1920s, Gretsch had become the largest instrument importing and manufacturing business in the country.

After gathering a successful reputation as a banjo and percussion company, Gretsch debuted their first guitars, focusing primarily on jazz musicians in search of acoustic archtops and country-western performers looking for flat-tops.

The Golden Age of Gretsch Guitars

The 1950s and 60s are considered the “Golden Age of Gretsch guitars,” as the company dominated the market, outselling and pricing higher than competitors such as Fender and Gibson, who were less innovative in comparison. Gretsch introduced a color revolution that expanded beyond the traditional sunburst bodies. Ahead of the curve, they released electric guitar models before the rock genre exploded, introducing the Electromatic and Electro II in 1951 and following with the solid-body Duo Jet in 1953. In 1955, the company began experimenting with more inventive designs and released its most famous and memorable models including the Gretsch 6120 (which came be called “The Nashville”) and The White Falcon, once called the “guitar of the future.”

Gretsch guitars, specifically models produced between 1954 and 1969, are known for their low treble notes and twangy sound. If you watched the tube in the 1960s, their instruments were a staple of the screen. At the moment Beatlemania was born on the Ed Sullivan Show in 1964, George Harrison was playing a 6122 Gretsch Country Gentleman, which he continued playing at other historic shows including The Shea Stadium and Hollywood Bowl concerts. Another Country Gentleman was presented by The King of Rock ‘n’ Roll in a 1970 Las Vegas show where Elvis Presley played the instrument himself, center stage. Gretsch was hot and its instruments not only appeared in nearly every episode of The Monkees but were also played on I Dream of Jeannie, It Takes A Thief, Mannix, and The Name of The Game. Even Charlie Watts from The Rolling Stones swore that Gretsch drums were unmatchable at the height of his career. It is no stretch to call these instruments, especially the colorful and unique-sounding guitars, iconic and deeply central to music history.

The History of the Gretsch 6120

Anyone familiar with “For What It’s Worth” by Buffalo Springfield has heard a Gretsch 6120 played alongside their White Falcon. The deep treble notes and the tremolo in the background is a perfect example of the 6120 sound quality. The Gretsch 6120 is a “golden years” instrument, one of the guitars that built the rock genre.

Prior to pairing with Chet Atkins, Gretsch had been primarily endorsed for its percussion instruments. Jimmie Webster, a Gretsch designer, approached Chet regarding their shared passion for improving the playability and sound quality of the electric guitar. In 1955, they released the “6120 Chet Atkins Hollow Body.” The original Chet Atkins model is designated a “Western Orange” hollow-body electric guitar with DeArmond pickups and f-holes. The quintessential Gretsch electric, this 6120 model topped the guitar market priced at $385, beating out top competitors such as Gibson and Fender.

In the mid-1960s, the guitar name was changed to “6120 Nashville” but is currently listed under the original name. Chet would later reference his Gretsch endorsement as a significant step in his career and state that the 6120 marked his arrival as an artist. The models containing the rich sound quality heard during the golden era ceased production in the late-1970s, upping their future value as they were so unique and beloved.

Each reinvention of the Gretsch 6120 has a slight difference in pickups, bracing, and knob configurations. The 1955 6120 Chet Atkins Hollow Body is decorated with cow heads and cactus etchings in the block markers with a big G brand on the top. It has a 16-inch body, two f-holes, and two Dearmond pickups. By 1957, the G brand disappeared. The following year, the more common Gretsch markings were introduced, including the half-moon or “neoclassic” markings. This was the same year that The Dearmond pickups of the original model were discontinued due to the introduction of “FilterTron” humbuckers, which were requested by Chet Atkins and would be cited as a major contributor to the twangy sound of the instrument that keeps it in demand.

The 6120 received a second major revisit in 1962, which saw an end to the f-holes for better feedback resistance and a lack of signpost. This makeover rendered it almost unrecognizable from the initial model, becoming a double cutaway Electrotone body guitar with a padded back to cover the access hole on the backside, a standby switch, and a muffler.

Other rockabilly artists would come forward to establish their own variations of the 6120 including Eddie Cochran and Duanne Eddy. The Cochran 6120 model would include a special “open” internal body design with a DynaSonic single-coil bridge pickup and Lindy Fralin “Dogear” single-coil neck pickup. The Eddy “King of Twang” model would feature twin DynaSonic single-coil pickups, a Tru-Arc rocking bar bridge, and trestle bracing. In fact, another excellent reference to the fat and low treble notes can be found in “Rebel Rouser” released by Eddy in 1958. Even Brian Setzer later developed a signature model after rediscovering the 6120, adding oversized f-holes for improved sonic projection.

An unhappy marriage with Baldwin pianos in the 70s and 80s briefly threatened to upset Gretsch’s history of success. But during the initial years of guitar production, Gretsch had hired a 19-year-old Duke Kramer who began as a horn polisher and remained faithful to the company for the entirety of his career, coming to be known as “Mr. Guitar Man” and eventually president of the company in 1984 before returning its ownership to the Gretsch family in 1988.

Kramer then renewed the company’s vigor with the production of Traveling Wilbury, a unique collaboration with George Harrison who remained a devoted advocate for Gretsch guitars throughout his career. This collaboration marks the beginning of their re-emergence as top market competitors— a reputation that they have maintained ever since, operating independently under Fender since 2002.

The Gretsch 6120 achieved a renaissance during the 1980s. Understandably inspired by Eddie Cochran, a key influencer of the punk movement, Brian Setzer performed with a hollow body Gretsch 6120 in his 1950s-style rockabilly group Stray Cats in 1979. Similar to the wild popularity of the Gretsch Country Gentleman following the debut of The Beatles on The Ed Sullivan Show, the original “Western Orange” hollow body 6120 model received massive attention after the Stray Cats debuted their music videos on MTV and gained popularity in America. The band was part of the original generation of music videos when the channel launched in 1981, sparking a rockabilly revival in England.

When asked about his guitar choice, Setzer claimed that “nothing feels right after a Gretsch.” He was initially attracted to the visual aesthetic of the instrument but cites the twang of the guitar specifically as a key influence of the riffs that have inspired his visionary approach to music. The 6120 especially provided him with the f-holes and archtop style that defined his style. He regards his original Gretsch 6120 as one of the great survivors of his career. The demand for his 6120 signature model allowed for the renewal and success of Gretsch throughout the 1990s.

Other than Chet Atkins, Duane Eddy, Eddie Cochran, and Brian Setzer, there is a long list of players of the 6120. These include Pete Townshend of The Who, who plays it on their track “Won’t Get Fooled Again” and claims to have fallen in love with the sound as soon as he connected the guitar to an amp. Since 1985, Poison Ivy Rorschach, popular guitarist and co-founder of The Cramps, has been married to her hollow-body Gretsch 6120. The increased visibility of these vintage 6120 models created a demand for the style and sound of these legendary rock instruments that continues today.

Today, a wide range of 6120 models are available, including a variety of Brian Setzer models and reissues of the 1950s classics. This guitar style was one of the first to be revived on a massive scale with multiple models and variations. The Gretsch-GEAR database allows access to 49 different models and 699 examples in the 6120 family. 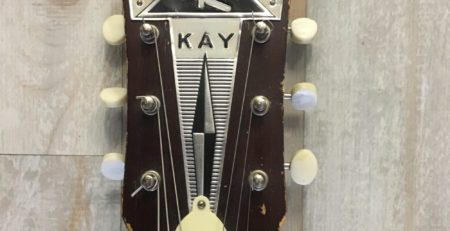 Vintage & Used Guitars for Sale 1963 Kay Vanguard This vintage Kay Vanguard electric was made in the USA in 1963. The... read more 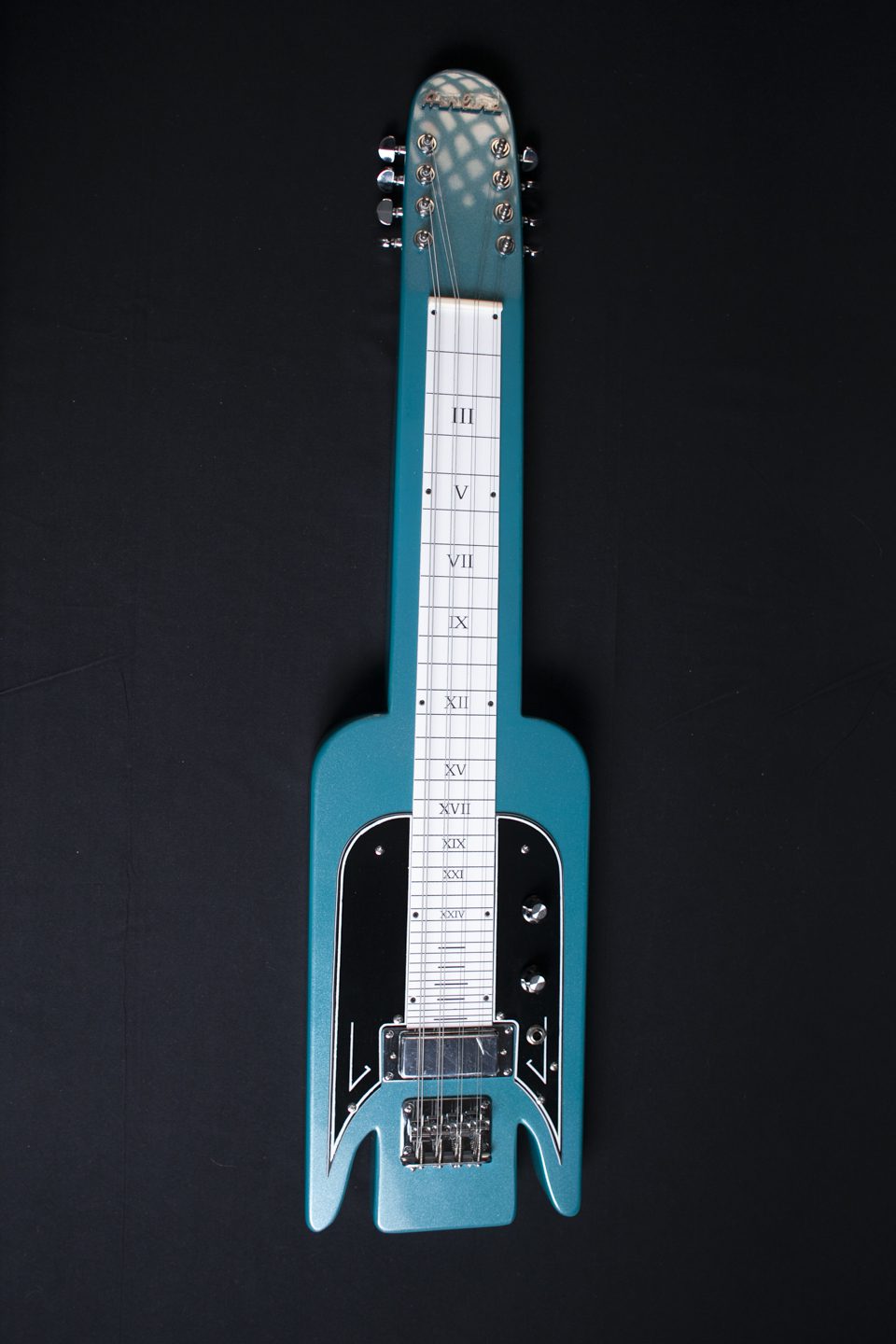 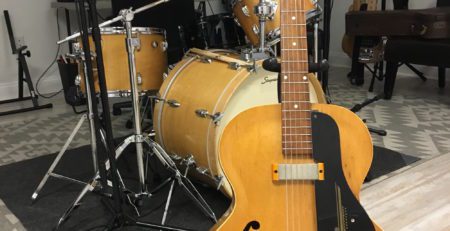