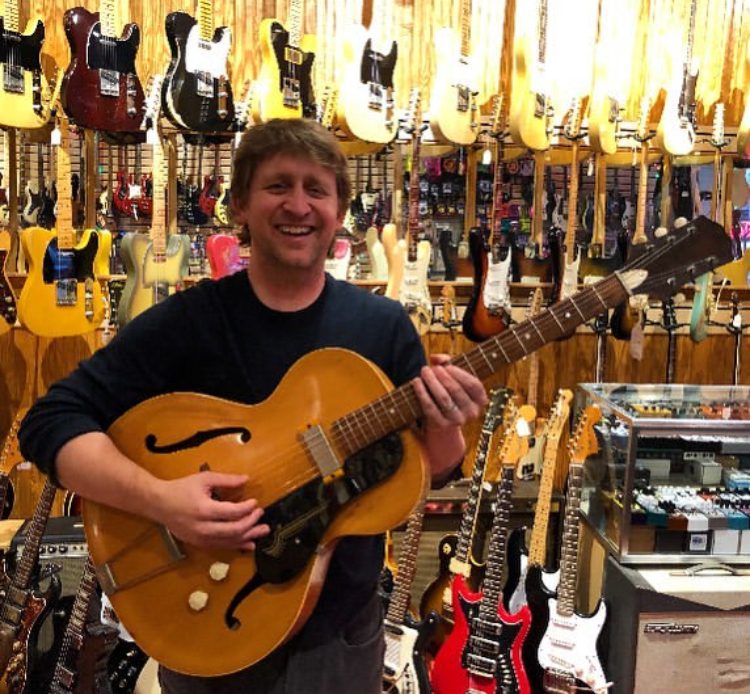 Like seemingly most of the great beginnings in American History, the story of Epiphone begins with the story of an immigrant to this great nation. Anastasios Stathopoulo was the son of a Greek timber merchant, and while still in Greece, he began crafting lutes and violins in 1873. He then moved with his family to Turkey and opened an instrument factory in 1890 and had his first son, Epimanondas, in 1893 (followed by three other children a few years later). This son, Epi, would come to be the genius of Epiphone Guitars.

By 1903, the Stathopoulo family had to move again, due to persecution of Greek immigrants in Turkey, so they took the long trip to the United States of America – a place where an immigrant could come and work hard to build a good life for his family. They settled in New York, in lower Manhattan. They crafted instruments in their shop on the first floor and lived on the second.

The family did well. Mandolins were hot at the time, and Anastasios made great mandolins.The family became affluent, and their children enjoyed a quality education. They moved the business into a warehouse at 247 West 42nd Street.

Of course, nothing stays forever, and Anastasios died at the age of 52. Epi, 22 at the time, took control of the business. Epi was by all accounts not only a savvy business man and a great craftsman, but also a talented and skilled musician.

After World War I, banjos became all the rage, and Epi was quick to release an innovative, high-quality line of banjos. This is also when Epi changed the name of the company to Epiphone – which is apparently a mixture of his name and the Greek word for sound.

The Epiphone banjos took the company to a new level – huge sales, celebrity endorsements, and more. And Epi, at the height of the banjo craze, introduced a series of guitars, which was seen as a distraction from the money-making banjos, but was a stroke of genius because the depression coincided with a sudden fall from favor of the banjo and most banjo companies went out of business. The guitar was the new popular thing.

The first guitars Epiphone released were not very successful. They were small and ornate. They couldn’t compete with the size and volume Gibson’s models. So, Epiphone released a new series of archtops in 1931 – called the Masterbilt series – that were very similar to Gibson’s archtops at the time. This kicked off one of the greatest guitar wars in history – Epiphone versus Gibson. Gibson was not happy with Epiphone’s new releases – claiming they were copying Gibson’s innovations. So, Gibson went even bigger and louder with their guitars. Then, Epiphone returned fire with their high-end Emperor.

Epiphone became known as one of the best guitar brands in the world. Even the legendary Les Paul (now synonymous with the Gibson brand) went from being a Gibson player to being an Epiphone player and played nothing but Epis until Gibson eventually manufactured his name sake guitar in 1952 – the Gibson Les Paul. Les Paul even tells a story that in his first ad with Gibson where they say “Welcome to the Gibson Family” that he refused to hold a Gibson. He held his Epiphone instead. He said when Gibson makes a guitar as good as these Epis, then he’ll switch. They apparently took the Epiphone badge off the Guitar and put a Gibson decal on the guitar to pretend it was a Gibson (which is crazy!!).

You can hear Les Paul tell this and other stories (and profess his love for these old Epis) in this video:

The  jazz guitar models – like the Century and  the Zypher, dominated the 40s of American Jazz players. According to Wikipedia, “Django Reinhardt acquired a Zephyr to play during his American tour with Duke Ellington in 1946. He used the guitar for the rest of his career.”

Here’s some of Django’s music for your listening pleasure:

Unfortunately, Epi had died of leukemia during World War II, and did not see what may have been the absolute peak of the company – a peak that he created with his innovation, business savvy, and dedication to craftsmanship. The younger siblings took over and guided the company through Epi’s momentum but began to disagree and fall apart during the early 50s. The company was no longer innovating, but instead putting out what had worked well in the 40s. This was to their detriment, because the 1950s saw the release of Leo Fender’s Telecaster and the explosion of the electric solid-body guitar.

By 1957, Epiphone was sold to Giboson for $20,000 to avoid falling into bankruptcy. The brand became a second fiddle to the Gibson brand and has been seen that way ever since. Epiphone did go on to have a few more golden ages under Gibson (one of which is right now!), but that is for a different article.